flagstaff to portland by bicycle

... across grand canyon national park, the great basin, and the Harney basin
​through arizona, utah, nevada, and oregon in solitude and wilderness. 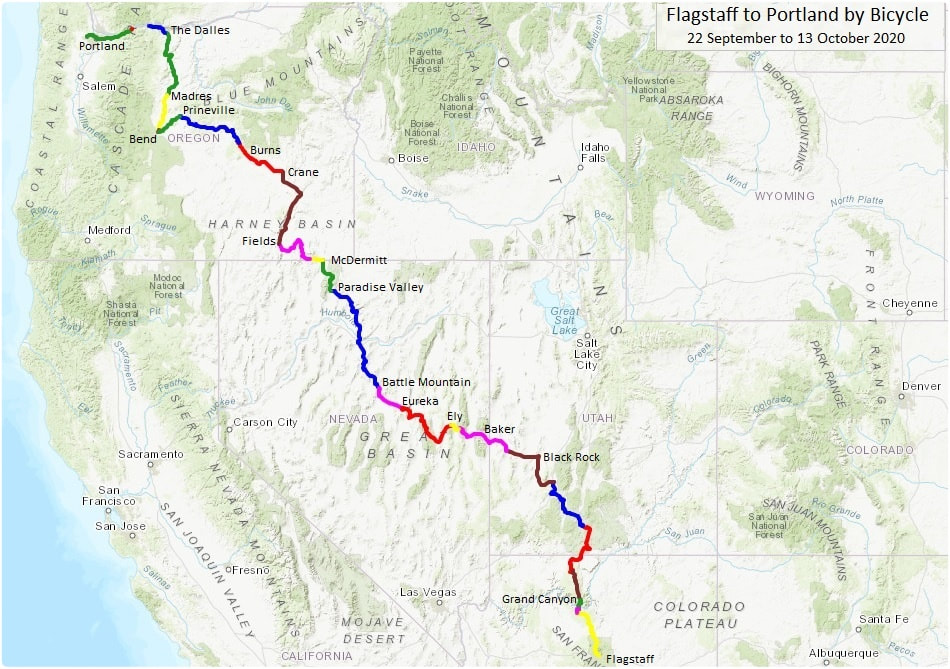 My route from Flagstaff to Portland by trail running shoe (Grand Canyon crossing) and bicycle, 22 days including start and finish dates (22 Sept and 13 Oct). In most cases, colors represent a days journey. Total distance and elevation gained along the route, 1596 miles and 85,000 feet, respectively.

Concept: visualizing and assembling the tour 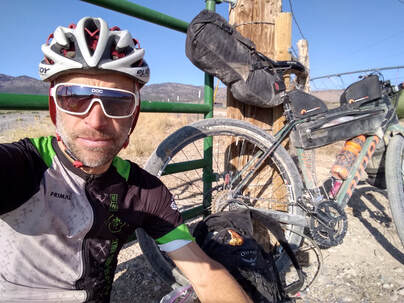 Refueling for the final ascent to Ely, NV.
The initial seed for this tour was a visualization that I replayed in my mind many times after an adventurous friend, Brad Ells, returned, a few years ago, from the Arizona Trail Race and talked about his experiences crossing the Grand Canyon with his mountain bike and gear attached to a backpack.

Proximate to this visualization was another, this one involving a recently popularized, cross-continent gravel route known as the Trans-America Trail (TAT). I first heard about the TAT when someone organized the first-ever gravel bike race across this route, an event that took place just a couple of years ago.

To these remote, scenic, and rugged options for a bicycle, I added the desire to connect to old friends, and not just connect but to spend quality time including the opportunity to share a part of the tour with another rider for the first time, my friend Adam Schwindt.

These three ideas eventually blended into one bike tour, an attempt to ride from Flagstaff, Arizona all the way to Portland, Oregon on primarily gravel roads ad some single-track. Preliminary calculations suggested the tour would take me about three weeks to complete. Distance and elevation gained would be around 1600 miles and 95,000 feet, respectively.

The Route & Highlights: a brief overview 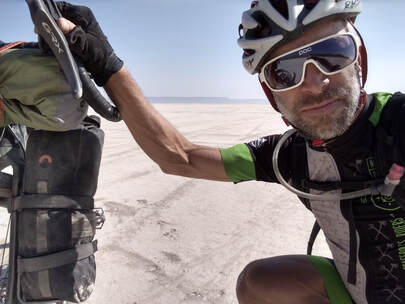 Exploring Alvord Desert, a massive dry lake bed most of the year where many land speed records have been set.
On the 22nd of September, 2020, after spending a few quality days and quality time with my friend, mentor and former supervisor, Loren Buck, I rolled-out of his garage and about an hour later arrived to the Arizona Trail (AZT) below Snowmass Ski Resort somewhere close to the city limits of Flagstaff.

I navigated the initial section of single-track with another friend, Zach Geiser, before he had to flip it and descend back towards town.

Beyond Loren, Zach and Snowmass, the trail wandered through ponderosa pine forests before descending into the desert, eventually onto gravel roads then back onto single-track, and ultimately to the south rim of the Grand Canyon.

Over the next two days, I crossed the canyon with my bicycle and gear, a total of about 60 lbs, strapped to an NRS, gear-style pack. I spent the evening between at Cottonwood Campground above Phantom Ranch on the North Kaibab Trail.

Exhausted but still able to move, though with significant discomfort, once on the north rim and reassembled, I cycled from the North Rim to Jacob Lake, 40 miles, some of it on the AZT and nearby gravel roads, where I rented a small cabin and tried to recover some of my strength before pressing on the next day.

The Morgan Fire precluded my planned route to some extent, which I easily revised after being turned back, by a road block, in the forests west of Jacob Lake. Like the original I suspect, my revised route turned-out to be a remote and rugged alternative to the road most traveled.

I arrived to the Utah border not far from Vermillion Cliffs National Monument which I subsequently rode through on my way to Grand Staircase-Escalante National Monument, Cottonwood Canyon Road, Kodachrome Basin State Park, and Bryce Canyon National Park.

Beyond Bryce, I settled into some long stretches of asphalt road broken by smaller sections of gravel. Just before and after, I rode through (all in Utah) Cannonville, Tropic, Panguitch, Beaver, Minersville, Milford, and Black Rock.

The time it took me to arrive to and cross the Grand Canyon was much longer than anticipated. This led to the second of three modifications to my original route. For these revisions, timing mattered, for Adam (more below) and also my work schedule, I tried to stick to the 3-week window I'd allocated for the tour. This first detour took me through Panguitch then onto Beaver on Route 20 where I lodged in a fabulous, locally owned motel. My original plan was a longer route, over a mountain top to Paragonah, and primarily on gravel.

At Black Rock, Utah, amidst only creosote bush and ravens, I turned left onto loose gravel and the Trans-America Trail. Ten miles down the road, I passed a motorcycle. Otherwise, for the next 24 hours and 80 miles I cycled alone, through a gorgeous, desert landscape that demanded preparation to avoid the dangers of dehydration. There wasn't any water to filter, as I suspected, but the ca. 4.5 liter capacity on my body and bike would prove sufficient even for larger sections on the tour, 100-120 miles, as long as I kept my pace high.

Baker, Nevada was my first refuel and re-water point on the TAT; a town that sits adjacent to Great Basin National Park on "America's loneliest highway", Route 50. From Baker, I continued on to Ely, Eureka, Battle Mountain and McDermitt, all in Nevada. Between those towns, there was only remote basin and range, unbroken and inspired desert vistas and ecology for as far as you could see.

This part of the tour required 100% self-sufficiency, what I carried from each town had to get me to the next. Crossings varied from ca. 80-110 miles.

McDermitt was the last refuel stop in Nevada. Soon thereafter, I rolled into Oregon and began the next outback section that would lead me to Fields. This turned out to be exceptionally rough, primarily because of the super hard bedrock in the region, seemingly all basalt.

Tattered from long days and this day in particular, I rolled exhausted into Fields but was soon feeling better as I chit-chatted with curious travelers and ate food from the only market and café in town, the Fields General Store. This was my introduction to the Harney Basin. Unlike the Great Basin to the south, I wasn't aware of just how remote the Harney was. Off the charts, total wilderness from the perspective of a solo-bloke on a bicycle.

At this stage, this time due to fires in Oregon, the Paisley fire in particular, I diverted my original route a third and final time. Instead of a southwest trajectory on the TAT to California then back into Oregon to Silverlake, I'd instead ride directly north, departing the TAT at Fields, across 40 miles of rough gravel, past Steens Mountain Wilderness on the left and Alvord Desert, a massive dry lake bed most of the year, on my right. A spectacular setting for a guy on a bike. My soul drank as much as it could despite the rough conditions of the gravel road.

Beyond the gravel, another ca. 10 miles, I arrived to Route 78, hung a left after a memorable (depleted mind and body) food and water stop, and ultimately rode into the dark, 108 miles for the day, to Crystal Crane Hot Springs in Crane, Oregon.

I started very late the next morning, after a proper soak in the facilities palatial pool, and made my way to groceries in Burns then back into the peripheral spaces, the spaces between, where wild critters still dominate, eventually to 6000 feet where I camped for the night inside my own grove of giant ponderosa pines.

Gravel part of the way led me to Paulina and Post the following day. Beyond Post, which claims to be "the center of Oregon", I closed the gap to Prineville and by this point was inside of the central Oregon bubble and all the usual signs of modern man, noisy machines foremost.

Prineville was nonetheless a treat and Bend was not far, 34 miles on my GPS. I used a combination of mostly asphalt and some gravel. At times traffic patterns and speeds were uncomfortable but those conditions didn't last long; each time I was able to escape to a lesser traveled road. I arrived to Bend 18 days after departing Flagstaff, on 9 October.

That evening I was joined by the next friend that would join me on this tour, and for a significant portion, Bend to Portland. Adam and I enjoyed the next morning, coffee, more coffee, food, snacks, more snacks, before finally rolling out at about 1 pm which allowed us to cover 50 miles, to Madres, before we bedded down for the night.

From Madres we rode-on to The Dalles the following day, 95 miles; then another easy, to Cascade Locks; before the final push, 65 miles, to his home in Hillsboro, a suburb of Portland that took us through the heart of the urban space before we were rescued by Forest Park, its sounds, smells, and greenery en route to Hillsboro. Much of what we rode was on the celebrated Columbia River Gorge Historic Highway, and much of this route was off-limits to autos.

Twenty-two days after departing Flagstaff on 22 September, Adam and I rolled-up to his aged-Toyota and modern front door and with that we officially concluded my 2020 tour, Flagstaff to Portland by Bicycle!

Those are the highlights and a rough outline of the route. I'll be back to fill in detailed chapters over the next few weeks, likely organized by geographic region (Grand Canyon, Great Basin, Harney Basin, Columbia River Gorge).

Curious visitors can view previously uploaded images and videos of the tour on Instagram or Facebook including captions with many more details than I've provided, so far, on my website.

Behold and be inspired, for this is, after all, one of Planet Earth's most spectacular achievements, the Grand Canyon!

Another moment to convene with my overwhelmed senses, to observe and be grateful, this beautiful national park.

Cottonwood Canyon Road, a long stretch of gravel that is impassable when wet (due to sticky clay soils) between (new) Paria, Utah and Kodachrome Basin State Park.

One of many stunning vistas available on either side of Cottonwood Canyon Road.

One of the opening scenes on the Trans-America Trail not far west of Black Rock, Utah.

The remote Harney Basin between McDermitt, NV and Fields, OR.

The Columbia River gorge viewed from the former, primary, east to west highway 30.

Many more images and complete chapters coming soon. Please check back from time to time for updates.