1 August 2020. A day of training on the Colorado Trail, Molas Pass to Durango at Junction Creek, 75 miles of blissful single-track. 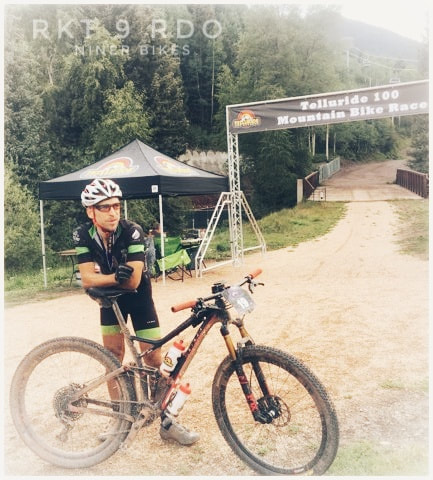 Telluride 100, 28 July 2018.
My transformation from student of academia to a professional (non-sponsored) bike racer and long-distance, adventure-touring cyclist began on 17 March 2010 when a progressive, Earth-friendly community, Fort Collins, Colorado, inspired me to purchase a bicycle.

At that time, I was 1 month and 17 days beyond my 39th birthday and I hadn't ridden a bike since adolescents when a bicycle represented a means to practical, but never athletic, ends.

For the next several months, what remained of 2010 and the following winter, there were very few exceptions, I used my bright orange, GT Avalanche (26er) mountain bike to commute on paved, city bike trails to and from Colorado State University where I was employed as a Postdoctoral Fellow in the Department of Fish, Wildlife, and Conservation Biology.

As this implies, something was keeping me from using the bike as it was intended, to explore dirt- and rock-inspired trails in easily accessible recreational areas such as Lory State Park and Larimer County's celebrated, among mountain bikers living on the Front Range, Horsetooth Mountain Open Space.

That something was what I felt when I observed the rocks, in particular, under and on both sides when I rolled-onto narrow single-track, trails that are just wide enough for one jogger or one cyclist. Over time that fear would dissolve but the process didn't occur overnight.

In the spring of 2011, thanks to friends on my men's over-30 soccer team, we were known as Mean Green and played at the now defunct but persistently infamous ODs-sports facility on the Fort Collins-Loveland border, I began to explore beyond the comfort and safety of concrete-surfaced, commuter trails.

This began at Maxwell Natural Area, a small but otherwise valuable component, for runners, mountain bikers, and more, of the City of Fort Collin's open space network.

My education from commuter to confident mountain biker got underway on the primary climb at Maxwell itself and at about the same time on connected "toothy", i.e., rock strewn, flow trails at adjacent Pineridge Natural Area and on trails that parallel scenic, Horsetooth Reservoir just beyond the top of the primary Maxwell climb.

From the spring of 2011 to the early winter period of 2013, my skills developed at a pace that sometimes fell short of keeping me on my bike saddle as I descended the most technical trails available in the Fort Collins area. Among them, of particular note, Ginny Trail at Bobcat Ridge Natural Area; Upper Timber, Mill Creek, and Howard Trail in Lory State Park; and Wathen in Horsetooth Mountain Open Space.

With cheap aluminum wheels, hubs, and not much more supporting me, equipment that was never intended for serious mountain biking including technical feats of balance and grip required to "drop" seemingly out of the sky on the upper sections of Howard Trail, this period was full of blissful ignorance and I quickly outpaced the willingness of my Mean Green soccer mates to ride, distance and hours.

Among no one other than my inexperienced self, I blazed forward, grinning without concern, as I amplified a habit that was already beginning to show signs of much more beyond the obvious, anticipated benefits to my physical conditioning.

At this early stage, hints of a massive and all-encompassing transformation in the health and wellness of my mind and body were beginning to take form.

In the early part of 2012 a friend introduced me to the documentary series (two films) that captured many aspects of the Leadville 100 mountain bike race. In these films, the Leadville 100 is referred to as The Race Across the Sky, fitting for an event that starts in downtown Leadville, Colorado, at 10,000 feet above sea level, before plunging into the nearby, looming Rocky Mountains on a 100-mile, out-n-back course.

By the early spring of 2013, an ignition was all that was necessary, a hot, passionate, emotionally-driven spark to initiate my journey from academic professional to an elite, amateur bike racer and (eventually) long-distance, adventure-touring cyclist.

In late February, 2013, the sudden, unanticipated departure of a girlfriend set fire to a vast reservoir of fuel, equivalent to a forest of dry timber, that had been accumulating over years of limited success and mounting disappointment in the hallways of academia.

About that time, when the ashes from the inferno were filtering earthward and forming a thin dust all around me, repeated revolutions on my longer and longer bicycle rides gifted to me brief periods of mental clarity.

It was during one of those moments that I set a goal that changed my life and planted the seed that would become this website: to set-out to qualify for and subsequently race in the August, 2013 edition of the internationally recognized and respected Leadville Trail 100 mountain bike race.

Around this time, I called up a friend, Alex Hagman, formerly a professional road racer on the Team Jelly Belly squad, and asked him if he'd be my coach. A few days later, Alex loaned me a 29er, Focus Raven, hard-tail mountain bike and two weeks later I was assembling the same bike in a hotel room in Austin, Texas, in preparation for my first ever experience racing a bicycle.

At the conclusion of the Austin Rattler, a Leadville qualifier, the following day, I had missed the qualification cut-off by four minutes but that mattered not one iota.

What mattered was how I felt, full of energy at the conclusion of the race, like I hadn't felt since I was a youngster exploring natural spaces close to my home in Franklin, Massachusetts, when life and neurons allowed for and promoted unrestrained, unfiltered adventures into the living fabric of childhood-inspired wonderland. In short, I was deeply inspired and filled with youthful energy from the experience.

A few weeks after my debut in Austin, Texas, a shotgun signaled the start of the Barn Burner, a 100 mile Leadville qualifier held annually on the outskirts of Flagstaff, Arizona. Many hours later, I crossed the finish line 7th among my 40-49 competitors and well inside of the qualification time for the 2013, Leadville 100 which I competed in a few months later and finished 198th, out of nearly 2000, in 8 hours 28 minutes.

​In My Road To Leadville, a short article that I wrote a few weeks after completing the Leadville 100, I share many details of that story. And throughout my website, visitors will find much more of what has unfolded since, including thousands of bicycle touring miles in the United States, Canada, Europe, and Asia.

... if one advances confidently in the direction of his [or her] dreams, and endeavors to live the life which he has imagined, he will meet with a success unexpected in common hours.  – Henry David Thoreau

Looking ahead, my hope is that my journey, captured on the pages of André Breton Cycling, will inspire others to reconsider their own possible and set goals to achieve a new-level of personal greatness, and then do it again and again throughout what remains of their lifetimes.

For those that accept the challenge, I predict that they will collide with, and annihilate, the borders of their comfort zone, an edge manufactured by typically baseless fear, and along the way achieve real, lasting, mind and body health benefits.

Beyond individuals that by chance arrive to André Breton Cycling, it is my hope that if one person discovers my story and starts their own journey then perhaps this one person will affect one more in the same way, a transformation of mind and body health with all of the benefits, and their sparks will lead to one more, and so on, ultimately creating a wave of outward spreading, contagious, positive change, a beautiful realization of the late Jane Jacobs simple prediction, "everything good starts small."

That is my wish and everything that comes with it for the well being of humanity and the biodiversity that inspires and nurtures us on Planet Earth.

If we could change ourselves, the tendencies in the world would also change. As a man changes his own nature, so does the attitude of the world change towards him. ... We need not wait to see what others do.
​– Mahatma Gandhi

From my website, visitors can check-out my race results and schedule and many more details including a list of friends that provide valuable advice and sometimes financial support, through generous discounts, for my racing and touring endeavors; a gallery of images; the latest news from André Breton Cycling is available in one of my travelogues; a summary of my touring history; and much more including services that I began offering in February 2021: Lifestyle Coach; Adventure Guide; Mentor; and Consultant.

​Thanks for visiting André Breton Cycling. If you have any comments or questions just holla. Here's my contact info including links to my accounts on popular social media apps.

26 April 2020. The view from my Giant TCR Advanced saddle at Molas Pass, training on the "million dollar highway" (US Route 550) between Durango and Silverton.