Bradford, Kansas to waterville, Maine by bicycle 3000 miles from the base of the rocky mountains, Across the Great Plains, over the mississippi river to the appalachians and the coast of maine.
Left: The opening, six day (6-12 Sept), 600 mile prelude from Fort Collins, Colorado to Bradford, Kansas plus the heart of the tour, ca. 2300 miles, from Bradford to Waterville, Maine. Right: an additional 449 mile afterlude, also by bicycle, from Waterville to the suburbs of Boston, Massachusetts and Providence, Rhode Island where I grew up in the 1970s and 80s and where many friends and most of my family continue to flourish.

I'm currently (Jan 2022) preparing a suite of videos that tell the story of this tour in much more detail than I was able to publish to social media (Instagram, Facebook) when the tour was ongoing. In the meantime, I have published two videos, one short / one long, on my YouTube Channel that describe the gear that I used to complete my tour, including my Niner Bikes RLT 9 RDO (carbon) gravel bike.

Runtime for the short video is just 37 seconds, a hyper-lapse of me unpacking and packing my bike at my winter base camp in Vail, Arizona a couple of weeks after the tour concluded. The long video gets into the details, everything in each bag, etc; runtime is 14 minutes, 18 seconds.

An introduction to my grandparents: 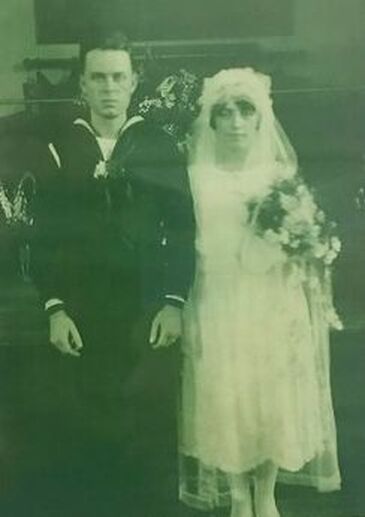 Glen and Edna Shaw, married July 10th, 1926 at their home on Summer Street in Franklin, Massachusetts.
Glen Stanley Shaw, son of Charles and Flora, descendants of Scottish, Irish, and English stock and just 1-2 generations removed from their immigrant ancestors that arrived to the east coast of the United States via a ship from Europe. Glen was born on June 5th, 1900, in the town of Bradford, Kansas. He had two siblings, Charles Ernest Shaw and Eunice Marie Shaw (above, bottom-right). Eunice married Clarence Wilson and had two kids, William and Jimmy, I met Jimmy (above, bottom-left) for the first time in my life on this bicycle tour!

Bradford didn't survive the exodus of people from the Great Plains as the Dust Bowl and subsequent economic troubles literally suffocated the region and its inhabitants in airborne prairie topsoil and farming debt (highly recommend The Worst Hard Time by Timothy Egan for all the details), The decommissioning of the Atchison, Topeka and Santa Fe Railway, which passed directly through Bradford, also contributed. But just 5.6 miles from the former center of Bradford, on the same gravel roads that my grandfather knew as a kid, the hub of this part of the Flint Hills, Eskridge, Kansas, persists and hasn't changed much over the decades since my grandfather Glen walked its streets, went to church there, and more (top-left).

Glen went to school in Eskridge and likely lived for a portion of his life there before he joined the US Navy (top-right). Eventually he'd be assigned to a station in Connecticut, as a cook on a submarine. This later-in-life proximity to New England explains, in part, how he eventually met my grandmother, Edna Blanch Lanagan (February 1910), parents Mary and John, my great-grandparents that moved to Massachusetts from Canada, possibly from Nova Scotia.

​I want to thank (above, middle, blue ball cap) Gary Kemble, Jimmy's high school classmate, a man I met by chance the night I arrived to Eskridge, for all of the insights he provided and a friendship that he offered without hesitation. Gary added tremendously to my visit. He connected me to my cousin Jimmy. He also introduced me to every old-timer in town. They all remembered and loved Eunice (above, bottom-right), the high school cook for many years. But perhaps the kindest thing he did was drive me out to Bradford in his dusty blue truck, the whole way vividly describing scenes that were no longer there including the town of Bradford itself.

Joseph Archie Harold Breton was born on May 14th, 1914, in the town of Waterville, Maine to parents Henri Breton and Mary Duge (or Duguay). Not long after or before his second birthday, in about 1916, Joe and his slightly older sister (ca. 4 yrs old) were both dropped on the steps of a Catholic orphanage in Cambridge, Massachusetts. My grandfather would grow up there and in many foster homes, one not far from the woman (Gretchen) that would become his second wife in ca. 1944/45.

He spent some time in the military but no one is sure what branch or any other details. That's my aunt Sandra in his arms in the photo, below, bottom-left, one of three offspring from his first marriage to Muriel, who sadly died during childbirth. Joe subsequently married Gretchen, a woman with hints of Native American ancestry, born August 1918 (died February 1990), father George and mother Sadie.

Joe raised his children from two wives (Muriel had 3; Gretchen had 5) together in Franklin, Massachusetts, close to where I was born (January 1971). These were poor folks, my grandmother Gretchen, three children from Muriel (Geri, Leo, and Sandra) and five children of her own (Rodney, Nancy, Susan, George, and Joe) and my grandpa. For many years the house on their homestead remained unfinished.

Among other sub-optimal implications of a partially constructed house, my father and his siblings lived, for a time, in only a basement, prone to flooding, separated by bed sheets hung from the ceiling. Many of them, including my father, nearly drowned when the rear wall of the house collapsed during heavy rains associated with Hurricane Carol in 1954. An incident that was, in hindsight, a close call for the second son of Rodney and Evelyn and my brothers, Daniel and Christopher.

The tour is dedicated to Jurgis Radkis, the character from Upton Sinclair's The Jungle. He exists in that book and in reality as part of a novel, a fictional character. However, there seems little reason to doubt that his experiences were drawn from the realities of life in America for most people at the beginning of the 20th century. If you've not read the book, or perhaps did so years ago and have now forgotten most of the horrific and also deeply loving details, many sacrifices, same fatal, for friends, family, and strangers among them, either way I recommend (re)reading the story. I can think of no other book, off-hand, that will motivate most of us to be good humans.

What it means "to be a good human",

As I see it, there are at least three parts to that responsibility, to being a good human,

Among all of the choices that we might consider adopting as part of our expression of being a good human, how we respond to climate change seems foremost now that we've arrived to 400 ppm of carbon dioxide in the atmosphere, the tipping point that science warned us about for decades.

Will we listen now and respond admirably? With sacrifice, generosity, and kindness? Quality of life, in fact life for our species and all of planet earth's biodiversity, now hinges on this choice.

Will we learn to live life better with moderation or continue to be selfish in far too many ways? We've tried consumption and by now many are suffering the consequences, in slums around the world. Biodiversity, a complex of living organisms that nurture all of us, is also quickly declining as more and more species go extinct and many more line-up to follow them every year.

Ultimately, as part of our individual pursuits to be good humans, all of us can and should want to do better: for ourselves, for the people that gave us so much, including our grandmothers and grandfathers, and for those that will not make the choice to be born into any of it but will be nonetheless. What will they find when they begin to understand? That's entirely up to us. Let's go there, and take them with us, responsibly, with compassion and kindness.

Sections of the Tour: "chunking"

Below the tour is broken into sections that I visualized from the comfort of my laptop as I was assembling routes of 200-400 miles using Strava's route building tools, from the comfort of a friend's home, Marty and Nancy, in Fort Collins, Colorado just before the tour began. I subsequently used these sections to "chunk" my way from Fort Collins to Waterville, Maine and beyond, from Waterville to the Boston suburbs during the tour's afterlude.

Chunking is one of my tricks, well known among endurance athletes for overcoming a long bicycle journey. The idea is simple, take on as much as you can manage, mentally and physically, at any moment, overcome that manageable "chunk" then visualize the next and overcome that one, etc. A simple concept that anyone can apply to any challenge and achieve success far beyond what most of us realize is possible.

As of 13 November 2021, weeks since the tour concluded, writing from the comfort of another generous friend's home, Stephanie T, and my latest cycling base camp, this one in Vail, Arizona, only a brief summary of each section is provided below. My intention is to fill in many more details including an eventual video documentary on my YouTube page from footage that I captured using a GoPro Hero9 camera.

In the meantime, use the links at the bottom of this page to visit me on Instagram or Facebook where you'll find images, videos (primarily on Facebook), and daily logs, short, contemporaneous descriptions of my experiences on tour each day. 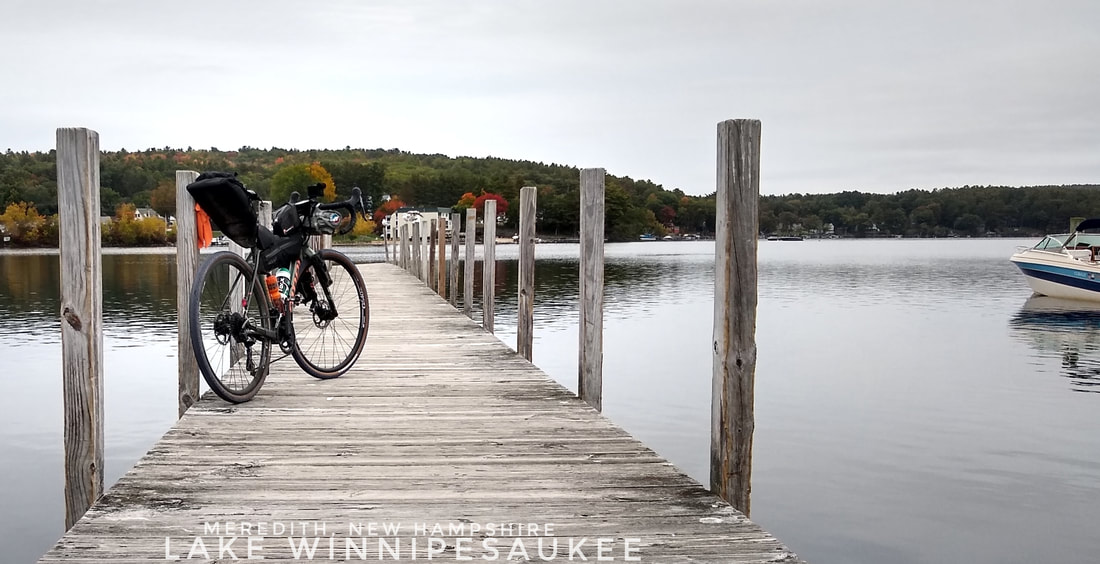 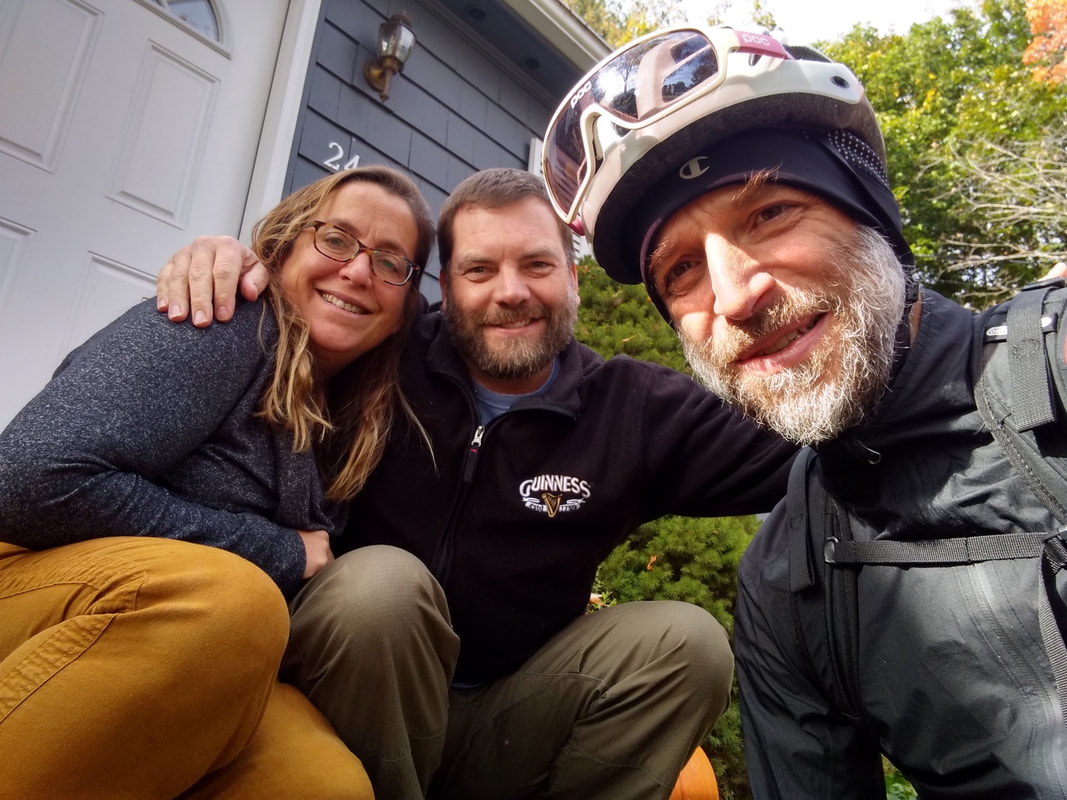 Images with people, from the afterlude: Top, Sage in Round Pond, Maine; Sue and Anthony in South Bristol, Maine; Middle, Laura and Brad in Cumberland, Maine; Bottom, John and Angie in Topsham, Maine and Tanya in Waterville, Maine.