My Road to Leadville
Originally Written For Integrative Physiotherapy (2013) 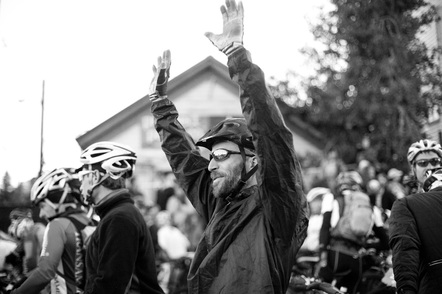 Credit: Katelyn Vondfelt
At 10,152 feet (3,094 meters), Leadville is the highest incorporated town in the United States. The 2nd and 3rd highest peaks in the lower 48 states, both over 14,400 feet (4,398 meters), are easily viewed from main street. Historically, Leadville was a mining town. Leadville eventually went bust, like many mining towns, and stayed that way until a mayor (Ken Chlouber) with a lot of foresight and guts decided to try something unthinkable for a mining town ... he decided to sponsor 100 mile endurance running, and eventually, mountain bike races. That idea eventually led to the Leadville Race Series now (30 years later) a celebrated endurance series for runners and mountain bikers that learn the meaning of "digging deep" and "I won't quit" (Ken Chlouber) when they race 100 miles on a course that rarely drops below 10,000 feet (3,048 meters). The story of how I transitioned from recreational rider to endurance racer involves a soccer injury, one year and seven months in physical therapy, an impulse purchase of an entry-level mountain bike, and finally, at age 42, a top 200 finish in the epic Leadville Trail 100. I hope visitors will consider reading all of the details of my story, it's the story of My Road To Leadville.

Ken Chlouber, founder of the Leadville Race Series, has been around endurance athletes for three decades. And from his experiences, he's come to the conclusion that “you can do more than you think you can ... you're stronger than you think you are.” Implicit is the role of visualization in our successes and failures. In the context of physical therapy and wellness, this insight is also taught by Dr. John Kummrow (DPT) at Integrative Physiotherapy (IP). For me, a long-term patient at the IP clinic, the significance of visualization didn't crystallize until I realized that my unusual trajectory through life could be, in part, explained by my habit of visualizing, something I developed at a very young age. In my youth, I spent hours standing, tip-toed, on a cast-iron radiator in my childhood home staring wide-eyed and curious out the window imagining faraway places. Thirty years later, I've traveled across many of Planet Earth's land masses and oceans. I now believe that visualization, when I was a youngster, helped turn those childhood dreams into real life adventures.

Under the guidance of Dr. Kummrow, I'm now learning to use visualization to overcome and avoid physical injury, and to become a stronger, healthier athlete. The following is a brief account of how I ended-up competing in one of the toughest 100 mile endurance mountain bike races in North America. I hope the conclusion demonstrates the value of visualization in achieving goals, no matter how unachievable they may seem at the outset. 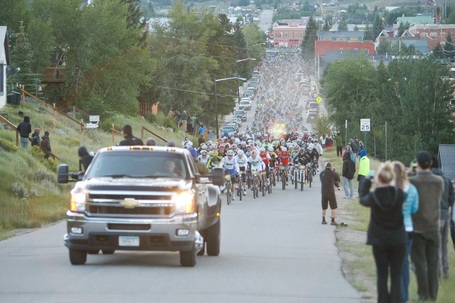 2013 Start of the Leadville Trail 100
In February 2013, on the heels of a few disappointments, I was inspired to imagine myself racing a mountain bike and that visualization eventually led me (a few months later) to the starting line of the Leadville Trail 100 Race Across the Sky. On race day, in preparation for a 6:30 AM start, nearly sixteen-hundred racers lined up in downtown Leadville, Colorado. This was my 9th mountain bike race experience; the previous eight races were part of my training to prepare for the Leadville Trail 100. The temperature that morning was in the 30's, cold penetrated my light racing gear including a wind-protective shell that I removed moments before the race began and stowed in one of my jersey pockets. 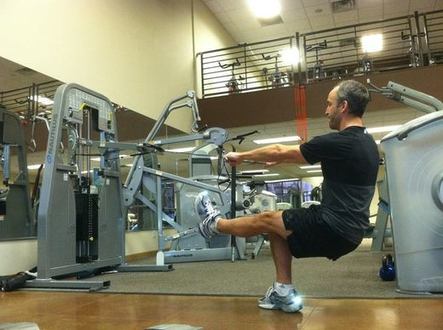 Integrative Physiotherapy Clinic, Fort Collins, Colorado
My road to Leadville began in January 2010 when I impulse purchased an entry-level mountain bike from Recycled Cycles in Fort Collins, Colorado. At that time, I had never been on a mountain bike, and hadn't ridden a bike regularly for years. Despite the off-road design of the bike, months passed before I hesitantly rolled onto any trails. Initially I was curious, then interested. My habit of mountain biking developed slowly until, in April 2011, I experienced a very serious groin injury while playing soccer. The injury caused me to leave soccer for one year and seven months. During this time, mountain biking became my primary sport.

Shortly after I was injured, I became a patient at Integrative Physiotherapy. Unable to play soccer, I re-invested some of my time in five sessions per week of physical therapy at the IP clinic (three 90 minute workouts; two 30 minute appointments). At the conclusion of my recovery, I was certainly stronger than at any other point in my life. But more important than strength were the benefits that I received from reinforcing, and in some cases, reconnecting, neurological pathways responsible for simple and complex movements (kinetic chains). These days, I often begin any exercise performed in the gym by visualizing the required movement, or series of movements, before I actually perform the exercise. By visualizing first, often with my eyes closed, I'm re-programming my neuromuscular system, forgetting bad habits, and making the most efficient use of my body. The results are stronger and more controlled movements, a movement strategy with obvious performance and reduced injury benefits that I've come to greatly respect as an athlete.

When I wasn't in the gym, especially in the warmer months, I rode my mountain bike many miles in 2011 and even more in 2012. Fortunately, riding a bicycle seemed to have no detrimental effects on my groin injury. Nonetheless, I applied visualization during my rides to make the most efficient use of my core especially in difficult sections and climbing. As I gained experience, my rides became longer and more technical. The pinnacle of this trajectory was a 100 mile route in Fort Collins and nearby communities that I mapped out and rode twice in 2012. My 100 mile challenge was inspired by the Leadville Trail 100 (LT100). This is a famous endurance mountain bike race, you can watch Lance Armstrong win the event with a flat tire in the 2009 Race Across The Sky video on YouTube for free. Fast forward to February 2013: Despite being cold and occasionally snowy, I logged many miles in February and March; as I pedaled I visualized, I thought about the Race Across the Sky, I dreamed. 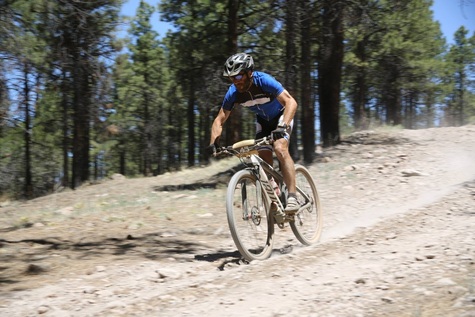 Landis Cyclery Barn Burner, Flagstaff, Arizona, 2013
Along the way, I met Alex Hagman, pro cyclist formerly with Team Jelly Belly. In the last week of March, I phoned him up and asked if he would coach me. By April 1, Alex was providing daily coaching instruction, especially my weekly riding schedule. Our goals were to qualify for and ultimately race in the LT100. On 13 April, I missed qualifying for the LT100 by just four minutes at the Austin Rattler, a 100 kilometer (62 mile) mountain bike race in Texas. I raced for 4 hrs 26 minutes that day and finished 60th out of 344 racers. Six weeks later I tried again at a 104 mile race in the national forest outside of Flagstaff, Arizona: I finished 25th overall and 7th in my age class, my best finish to date, and well enough to qualify me for the LT100. Training remained intensive after qualifying and included many more races to gain race experience prior to the LT100 including two 50 milers, one 100 miler, one 62 and one 40. From April to August, I logged 3000 miles on a mountain bike and climbed over 230,000 feet. I worked half-time at my job to accommodate training and racing. 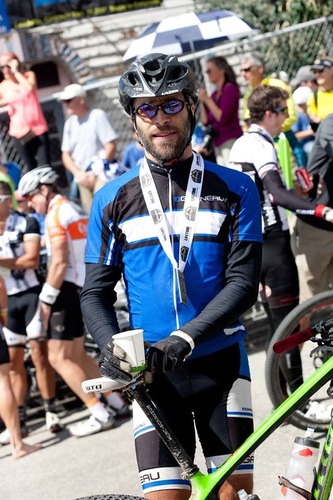 198th finisher of the 2013 Leadville Trail 100
Thanks to visualization, Alex, John, and my own determination, on race day I was ready to take on the Race Across the Sky. The night before the race, snow had fallen on the high alpine summits around Leadville, including Mount Elbert and Mount Massive, the 2nd and 3rd highest peaks in the lower 48 states. The starting line in Leadville is 10,000 feet above sea level, the course high point is just under 12,600 feet. In between, racers must overcome 12,000 feet of climbing as they descend and ascend along the 103 mile course. My goal for the race was to finish in just under nine hours. Instead, I finished in 8 hrs 28 minutes despite delays (about 9 minutes) due to a flat tire at mile 87. Overall I finished 198th out of 1,549 racers and 64th out of 554 in my very competitive 40-49 age class.

Shortly after the conclusion of the race I received a call from Alex, he wanted to know what I had chosen as my strategy for the race. I told him, "to visualize myself delivering smooth, efficient, power into the bicycle on every pedal stroke." I didn't realize how significant that strategy was for a cyclist. Alex paused for a moment and then responded, "it takes years for some cyclists to figure that out."

Despite all of the preparation, I'm still impressed by the contribution that visualization made to my race day performances. As I learned from Ken Chlouber, pro racer Alex, and Dr. Kummrow, a large part of what we can do is facilitated by how we condition our minds. If we condition them to believe that "we can do more than we think we can, that we are stronger than we think we are", then we will surprise even ourselves as I did in my rookie season of racing that concluded with the epic Leadville Trail 100 Race Across the Sky. 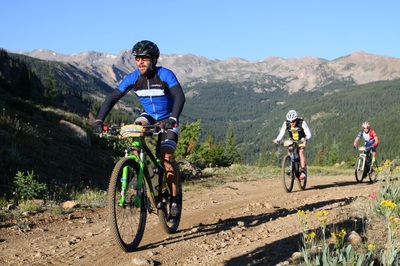 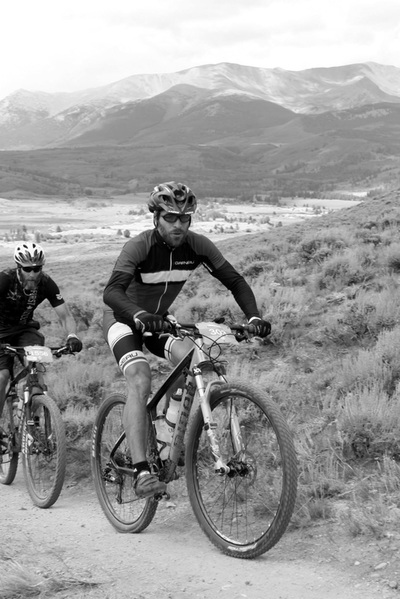 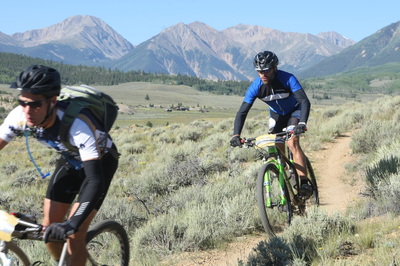